We left for Chamonix on the 10th of May 2013 for a weekend of mountaineering, famously known as the Piolets Jeunes. Quentin le blond, Quentin le brun, Maëlle, Yves and I drove down together to meet Sarah, Rémi, Antoine and Andy at the UCPA where we would be staying the entire weekend.

Once there, we got unpacked: Maëlle, Sarah and me in one room, Rémi unfortunately had to deal with both Quentins’ :), and Antoine, Andy and Yves got a third room to themselves. After a delicious and filling diner, we went back upstairs and reunited in one room to talk about the adventure to come. After our equipment was all organised and ready, it was time to go downstairs and socialise. Indeed, groups of people from all over France were staying in the UCPA, and our goal was to get to know as many people as possible.

Saturday morning was an early start. After a massive breakfast, we got our gear on and walked to the Aiguille du Midi cable car. It was cold, grey, and raining. After minutes of dying hope, we finally rose from the clouds and laid eyes upon a sea of clouds, one of the most beautiful views if you ask me. The sun was shining and so were our faces, we couldn’t wait to start using our ice axes.

We got teamed up and put our feet in the snow. There were many people on the mountain but it didn’t cause a problem. Our plan was to do the Arête des Cosmiques. I was teamed up with Antoine and Sarah, Maëlle with Yves, Andy with Quentin le brun and Rémi with Quentin le blond. After descending the ridge from the Aiguille du Midi, we walked around to the bottom of the route and got going.

Quentin and Andy were first; they were ahead of us for most of the trip and we only saw them again when we were finished. During the climb, we had a few rough moments, like Sarah losing her glove, or ropes getting tangled as we climbed, but it was globally a successful and very enjoyable day. The route got harder half way through: the rocks got steeper and the snow less solid as the day went on, only to highlight the adrenaline rushing through our bodies.
Once at the very top, just before climbing the ladder back onto the platform, we held our ice axes proudly one last time for a final photo, before getting the lift down.

Back at the UCPA, it was time for a shower and a hot meal. After diner we were invited to a ceremony for the Piolets Jeunes, during which important people with important roles got thanked and rewarded, and watched a couple of inspiring films. Back at the hostel we did what we do best: hang and do nothing. It was a fun evening ;)

On Sunday morning we got up later than expected. Indeed, we rushed out of the hostel towards the cable car only to realise that we were 20 minutes early for the next one. We spotted a Café not far away and decided to get a hot drink while we were waiting. When the drinks were served, Yves spoiled our joy by saying it was time to go: we gulped down our drinks which were far too hot and ran to catch it.

We went half way up the Aiguille du Midi that day: our plan was to do an "Ecole des Neiges", a course during which we would learn all kinds of things like tying special knots and rescuing a partner. I learned a lot that day, although it was mostly a couple of kids (and oldies) throwing each other around in the snow :)

We arrived half an hour early before the next lift that would bring us back down so we decided to have lunch at the station. A group of Japanese tourists passed by, hypnotised. One man even shouted out and took my ice axe, completely mesmerised by the object. It was funny and entertaining, and made me feel really cool.

That is the word that best describes our weekend in Chamonix; we had many fun moments, good laughs and it was globally a thrilling and awesome experience. 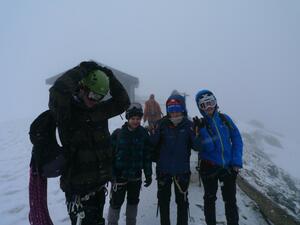 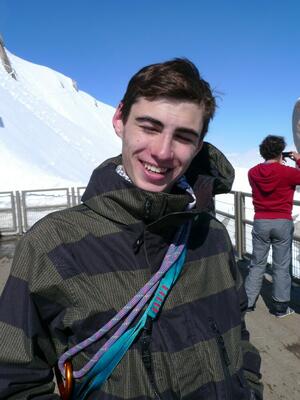 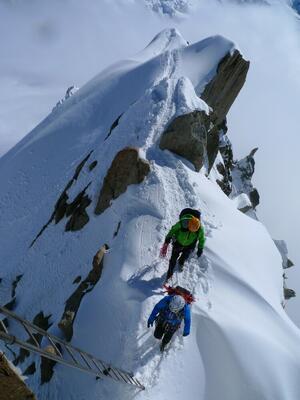 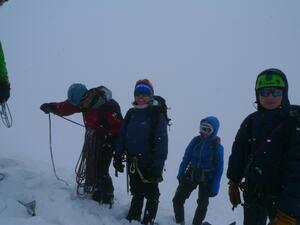